Christian faith is being used to persecute and marginalize transgender and nonbinary people across this country. We recognize the systemic harm that is being done in the name of Christianity, and we are actively seeking to improve our practice of faith and not contribute to the dysphoria for our transgender siblings.

As a church community, we welcome all people regardless of sexual orientation and gender identity. We believe that trans women and girls are female and trans men and boys are male, and that God loves them as such. We aspire to create an affirming space where transgender and nonbinary people feel welcome and loved and where intersectional diversity is normalized and embraced.

We recognize that the mental health and well-being of our transgender and nonbinary siblings is negatively affected by the rejection and bias of other Christian faith communities. There is an urgency to take action now to establish physical and emotional safety as well as safety within the Christian faith.

Our goal is to create a space that will not burden or add to dysphoria but will be accepting and affirming — a space where transgender and nonbinary people can thrive and flourish as an integral part of the beautiful, diverse, whole body of Christ.

Our family is pretty queer! That is to say, we have three young people in our immediate and extended family that identify as LGBTQIA. Talk of global injustices had pretty much always been part of our conversations at home and we tried ‘to do justice, to love kindness, and to walk humbly with God,’ at least most of the time. The continued targeting of LGBTQIA persons in our country causes me great concern. Shootings, attacks, and even political wrangling over where a person can go to the restroom fill the daily lives of queer people. Marriage equality is wonderful, but serious issues still remain for further equality. Healthcare for spouses and housing discrimination are just two. Our presence at Cville PRIDE is one of the ways Westminster shows up in solidarity with the LGBTQIA+ community. It celebrates an openness and support for our gay, trans, and nonbinary friends. It shows our community that as a place of faith, we can support marginalized persons. It helps us to get to know our siblings and is just plain fun! This church has provided our family with a church home for more than 15 years. Love and comfort both come from here. And acceptance. My hope is that all people can know this kind of comfort.” 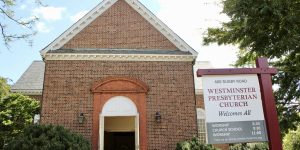 We invite all, and we are invited! Review our full Stewardship campaign below! November 7, 2021 – 24th Sunday after Pentecost; Dedication Sunday We apologize; there is not a live-stream recording for this service due to technical difficulties. Bulletin October 31, 2021 – Reformation Sunday Bulletin October 24, 2021 – 22nd Sunday after Pentecost Bulletin […]