The numbers cry for help: An average of 100 people die by guns every day in America, including six children. This year as usual our Virginia Capitol grounds hosted advocates on both sides of the gun debate for Martin Luther King Day. A handful of Westminster members were among 22 folks representing the Charlottesville Coalition for Gun Violence Prevention (CCGVP) at the Richmond rally for sensible laws to reduce gun violence.

Thanks in part to our congregation the bus ride was free. More importantly we’re developing common cause with other people from the League of Women Voters, Moms Demand Action, and others.

The argument over gun rights mixes religion, safety, sport and politics. The outcome depends on two factors: Which values have priority? And, can we listen to each other constructively? Christians can help the conversation when talk to each other as we want others to talk to us. 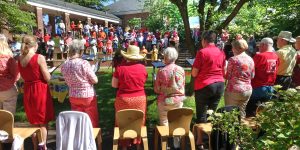