Our stewardship theme this year reflects our joyful response to God’s many blessings and steadfast love for us.  God greatly blesses us even in times of challenge and change from what was once familiar to a future that is not yet entirely clear to us.  Yet we know that God’s grace will lead and comfort us throughout the journey.  How can we help but respond with grateful hearts to share God’s love with each other and those in our community and the world?

The solo in this week’s service is an aria from Bach’s cantata 80, Ein feste Burg ist unser Gott.  This cantata has a complex history, being an adaptation of an earlier cantata, Alles, was von Gott geboren, which Bach wrote in Weimar probably in 1715 or 1716 for performance on the third Sunday of Lent.  The original cantata began with a paraphrase of a verse from the first epistle of John, “For whatsoever is born of God overcometh the world” (1 John 5:4) and ended with the second verse of Martin Luther’s chorale, “A mighty fortress is our God.”  When Bach moved to Leipzig, where cantatas were not permitted in the service during Lent, he adapted the work for use on Reformation Day (October 31) by including all of the verses from Luther’s chorale, adding a magnificent new opening movement to accommodate this. The aria, “Komm in mein Herzenshaus,” was reused in the later cantata apparently unchanged (the music for the Weimar cantata is lost), and is intimately scored for soprano and continuo (cello and keyboard instrument).  The text, “Come in to my heart’s house,” is underlined by an elegant melody which floats downwards, perhaps suggesting the descent of Christ from heaven.

This week’s anthem is an arrangement of a walking song from South Africa, “Hamba Nathi mkululi wethu,” performed “virtually” by the Adult Choir and Singers.  The song has origins in the repertoire of “freedom songs” from the anti-apartheid movement of the 1970s and 80s.  Many of these songs are influenced by traditional South African music and makwaya, or choir music, with short, repetitive forms incorporating a call-and-response structure.  The song is in the Xhosa language, an Nguni Bantu language spoken especially in the Eastern Cape province, and the lyrics are translated roughly as “Go with us, our Savior (Liberator).”

This week’s anthem is a setting of the hymn, “Lord of All Hopefulness,” by Jan Struther, the pen name of English author Joyce Anstruther.  She is most well known for creating the character Mrs. Miniver in a series of columns about ordinary life for the Times newspaper.  These were collected in 1940 into a book which was credited with swaying the American public in favor of entering World War II.  Struther wrote a number of hymns at the request of Percy Dearmer, editor of the hymnal, Songs of Praise (1931), where “Lord of All Hopefulness” first appeared.

This week the choir will participate in worship, virtually, singing Psalm 23: The Lord Is My Shepherd.  This setting of Psalm 23 is an African-American spiritual arranged by Larry J. Long, the Organist and Choirmaster at the Church of the Epiphany in New York City.  The combined choirs of Adults and Singers studied and recorded their portions of this song at home.  Our skilled technician, Matt Lyons, brought all of these recordings together and aligned parts to combine our individual voices into a virtual choir.  This week’s prelude is an organ setting of another African-American spiritual, Fix Me, Jesus, arranged by J. Roland Braithwaite (b. 1927), an African-American organist composer who taught at Talladega College in Alabama.

The University Mission Committee and UKirk are excited to announce that the new website www.ukirkuva.org has gone live! The themes of Welcome, Wonder, Work and Worship guide viewers through the site and highlight the inclusive and inviting spirit of both UKirk and WPC. Please enjoy clicking through the links and learning all about UKirk’s programs, staff and student leaders. It is through these efforts that Westminster’s mission to serve our UVA student neighbors is being realized. Special thanks to the design team of Ashley Dunn-Jalenak, Dorothy Piatt, Heather Henry and Nancy Paulson. 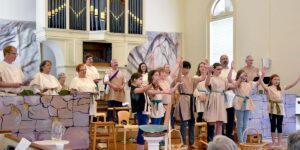 While you stay at home in an effort to curb the spread of the Coronavirus, our church school offering for our youngest disciples has begun and is geared towards children preschool age through kindergarten, but fun for any age! Begin with a time to sing and move with Ms. Megan, following a story from their […]