The Westminster Organ Concert Series celebrates forty years of concerts with a special anniversary concert on Friday, February 21, at 7:30 pm. Zephyrus Early Music Vocal Ensemble, directed by Megan Sharp, is joined by organist Jonathan Schakel for a program that reconstructs a vespers service from northern Germany in the early seventeenth century. The program includes extravagant music for multiple choirs by Hieronymus Praetorius, Michael Praetorius, and Thomas Selle, as well as magnificent organ music by Heinrich Scheidemann and Samuel Scheidt. The concert is free and open to the public and a reception afterwards will include prize drawings and historical artifacts from the past forty years.

The Westminster Organ Concert Series was founded in 1980 to share the newly installed all-mechanical baroque-style pipe organ with the community. Built in the style of organs in seventeenth-century northern Europe, the organ was constructed by Taylor & Boody Organbuilders of Staunton, Virginia, with 18 stops and over 1100 pipes. 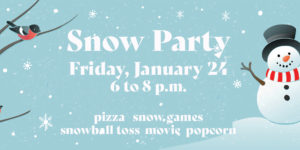 All children, Pre-K through 5th graders, are invited to a Snow Party on Friday, January 24, from 6 to 8 p.m. in Fellowship Hall. We’ll have snow-themed activities, pizza, our annual snowball “toss,” then finish with a movie and popcorn. R.s.v.p. here or on our Facebook page. Questions? Contact Sarah Bedford, .