This summer, from August 19 through August 31, I attended the Smarano Organ Academy in northern Italy. The Academy began this year in the Netherlands, at the Grote Kerk in Alkmaar, where Pieter van Dijk led masterclasses on that church’s two very famous — and fabulous — organs: the 1511 van Covelens organ and the 1636/1723 Schnitger organ. From there we flew to Smarano, a tiny village in the mountains of northern Italy, where courses were led in organ and harpsichord by Edoardo Bellotti, Sietze de Vries, Joel Speerstra, and Enrico Baiano. A special highlight was the visit of Montserrat Torrent, the 92-year-old (!) Spanish organist, who played a concert and taught a masterclass. Despite a very intense schedule (8 am to 10 pm every day, with short breaks for lunch and dinner), the high caliber of teaching combined with excellent instruments and a gorgeous location made the Academy a truly special experience. I am very grateful to the church for the time off and financial assistance that allowed me to attend the Academy. 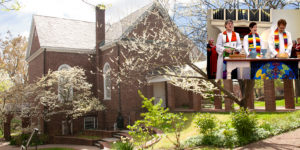 Click on the links below to find worship and other video messages and resources. While you stay at home in an effort to curb the spread of the Coronavirus, you’ll find hopeful and comforting messages, worship, and music.  We are the church still, safely sequestered in our homes. Please check back whenever you like. We’ll […]