No one has ever described me as a “morning person”—just ask Heather.  For being a high energy kind of guy, it may come as a surprise to you to learn that I start my mornings slow: wiping the sleep from my eyes, putting on an old sweatshirt, wondering where I put my glasses the night before, and starting the kettle for my morning cup of coffee.  My mornings also include stretching out and glancing at my NPR news app.  At the break of dawn, it takes me awhile to find my bearings.  A few years back, Heather and I attended a conference in Maine where we were invited every morning to begin our day by sitting in silence for 15-20 minutes.  Leaders lit a candle, read to us a brief prayer or poem and then, with the sound of a bell, we sat quietly, breathing in and out and placing our day in God’s hands.

Here in Charlottesville, Heather and I have begun this spiritual practice. It doesn’t take a class or a special curriculum.  Trust me.  Starting off your day grounded and calm in mind and spirit changes the way you interact with others and how others interact with you.

After my silent meditation and a second cup of coffee, I start to feel ready—in soul, mind, and body.  I’m ready to face the coming day.  And when I pull into Westminster Presbyterian Church and I get out of my car, I say one more prayer:  “O Lord, let me rise to the challenges of this day.”  My day begins.

Many of us have our morning rituals and routines.  We have our own unique way of summoning up the right attitude so we can be more fully engaged in our everyday relationships.  Indeed, we all need some time to wake up.   One of our Advent hymns (#17) begins this way: “Sleepers awake!” A voice astounds us . . . .”  For me,  Johann Sebastian Bach’s classic tune calls us to wakefulness.  Like many of our Advent hymns, we sing of the joyous news of preparing for Christ’s coming.  “Awake, Jerusalem, arise!” this hymn calls and beckons.  In essence, the hymn cries out, “Wake Up!  Wipe the sleep from your eyes! Put on an old sweatshirt! Stretch out! Meditate in the light of Christ. Get ready!”

“For unto us a child is born, a son is given and authority will rest upon his shoulders; and he will be named, Wonderful Counselor, Mighty God, Everlasting Father, Prince of Peace.” (Is. 9:6)

So, sleepers, wake! For Advent is here!

This morning, November 9th, I woke up at 4:30 a.m. only to learn that the person I never imagined winning the presidential election had won. After that, it was a long day.  Throughout my busy morning and afternoon, I met with people who felt the same way I did.  Some cried.  Many were experiencing anxiety over an unknown future. Others felt empty inside.  I prayed with folks and hugged others.  At Westminster-Canterbury, we read Psalm 23 and shared communion together.  Our girls in California and Oregon texted Heather and me, hoping their parents would soothe their fears and take the sting out of the election.  We were not sure what to say.  We simply texted back to say how much we loved them.  My mother called to tell me the last time she felt like this, President Kennedy had been shot. It has been a long, strange day and I’m sure there will be many more days like this to come. But two personal reflections have helped me end this day unlike I started it.

Years ago, after the earthquake in Santa Cruz, CA in 1989, after the US invaded Iraq, after an arsonist burned one of my churches­– after all these experiences– I turned to Psalm 46 for perspective and strength:

Psalm 46 reminds me that other people in the past have endured similar days of despair and change.  The Old Testament prophets certainly warned the Hebrew people about this kind of thing happening, and the people refused to listen. With the results of this election, perhaps this will be an era of more prophetic preaching and teaching.  Indeed, the ground may shift beneath our feet, the roaring waters may shake our confidence, and there may be no healing salve to take away the raw pain we feel, but the psalmist’s words echo in the chambers of our hearts: “Be Still.”   Psalm 46 reminds us that we believe in a wisdom that confounds the world’s wisdom.  God whispers in times like these, “Be still, and know that I am God.”

The second reflection I’ve had today, is my own complicity in not reaching out to those who hold such different views from my own.  I confess I have not been patient enough or mindful enough to really understand a point of view so foreign to my own. It’s difficult to see how a person reaches such a different conclusion on the direction of this country, but then, that person and I stand on the same soil and travel the same crowded highways.   And so, I am praying for patience and calm as the days unfold. O God, though I may disagree with those around me, help me to listen more carefully before jumping to conclusions or letting anger cloud my thinking. And when I find myself disagreeing with another person, help me to be still.

Want to know what I’m preaching about in October? Want to read the scripture passages before coming on a Sunday morning? Here are the texts and sermon titles for four Sundays. Thought I would tackle some challenging moments in the Bible that go along with the Stewardship theme, Set the World on Fire. 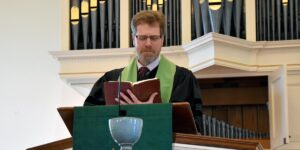 On Sunday, January 31, 2021 from 10:45-11:30 a.m., WPC will be hosting a Zoom Congregational Annual Meeting. At this meeting, we will act with “decency and order” to conduct three pieces of business: Nominating and electing two members to the Board of Trustees. Reviewing the church budget. Voting on the Terms of Call for our […]